"The Sheepdog from France" 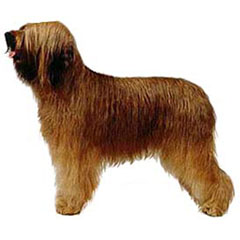 Dogs resembling Briards can be found in French art as far back as the eighth century, but it's not until the fourteenth century that we find dogs more definitely identifiable as Briards. Most breed historians believe the name, adopted in 1809, comes from Chien Berger de Brie (Shepherd Dog of Brie), which is what those early dogs were called. This suggests that Brie, a province in France, is their homeland. A few historians point out the name could also come from Chien d'Aubry. According to a fourteenth century legend, the dog of Aubry de Montdidier avenged his master's death, earning the dog high marks for loyalty and action. Whatever the source of the name, the first Briards protected flocks against wolves, and estates against intruders. The French Revolution changed that by dividing the land into smaller sectors, which meant flocks had to be kept closer to one area. Briards were then required to focus on herding and controlling the sheep rather than guarding them. The Briard was the official dog of the French army in World War II. Although the Briard remains France's most popular sheep herder, the breed enjoys only modest popularity in America, where it ranks 118thout of 155 AKC breeds.

Briards are true to both their herding and guarding heritage. They are protective and watchful companions, tending to think for themselves. This tendency to work independently stems from their method of herding, which was to basically control the sheep on their own by circling the herd, working as a sort of moving fence to keep the flock within a boundary. They can be aggressive toward other dogs, and cool toward strangers.

The Briard is square or slightly long in proportion, covered with coarse, slightly wavy long hair. He has a wide muzzle adorned with an abundant moustache and beard. His large eyes peer from behind long locks. His ears are large and covered with hair; they are often cropped in America. His tail is long, carried low, and ends in a curve called a crochet. The Briard has two dewclaws on each hind leg. His trot has been described as “quicksilver,” because it is so smooth and gliding.

Because they are natural guardians, young Briards need a lot of socialization to ensure that they meet new people in stride and without undue suspicion. Training should begin early, but Briards are not the typical hop-to-it obedience dog that so many herding breeds are. They are independent thinkers, and don't take well to forceful measures. Given reward-based training, however, they are extremely fast learners. Don't mistake that stubbornness for stupidity! Your Briard knows exactly what you want – you just have to convince him that it's in everyone's best interest to do what you say.

That shaggy coat doesn't come maintenance-free. Briards need brushing every day (or at least most days) to keep their coats free from mats and tangles. Bathe them every month or two, keep nails trimmed, and brush those teeth for good dental health. And don't neglect exercise! Most herding breeds have high exercise needs, and the Briard was bred to be on the move for hours at a time. Don't expect him to be satisfied lying around the house or even strolling around the block. He's up for a long hike or run any time you are, but don't push him in hot weather. You wouldn't want to go jogging in a big fur coat, would you?

The Briard's major health concerns are hip dysplasia and gastric torsion. Some may experience retinal problems leading to blindness. A few suffer from heart problems. Talk to your breeder about these issues.

Tramp on "My Three Sons;" Buck on "Married…With Children." Briard Lancelot was the first successfulrecipient of gene therapy.

© Copyright 2014 LifeLearn Inc. Used and/or modified with permission under license.