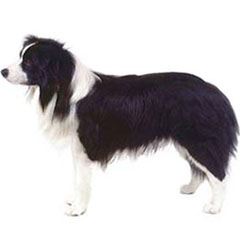 The modern Border Collie descended from sheepdogs who worked on farms situated near the border between England and Scotland. The breed is the result of a mixing of many other breeds, all with an eye toward creating a dog whose prowess with sheep was far more important than his appearances in the show ring. The first Border Collie breed standard – a written description of the ideal Border Collie – focused solely on the dog's work rather than the dog's physical appearance. In fact, the breed wasn't recognized even by the American Kennel Club until 1995. Even then, many breed enthusiasts opposed AKC recognition, arguing that bringing the Border Collie into the show ring would compromise the breed's effectiveness in the sheep pasture. In 2006, the Border Collie ranked 56th among the 155 breeds registered with the American Kennel Club.

An oft-repeated light bulb joke summarizes the Border Collie's temperament well. When dogs of various breeds are asked how many dogs are needed to change a light bulb, the Border Collie responds, “Just one – and I'll replace any wiring that's not up to code.” This is a dog who needs to be busy. He will never be satisfied with life as a couch potato. The Border Collie lives to work. Although the dog's heritage involves herding sheep or other livestock (a job which many of these dogs continue to do today), the Border Collie also excels at dog activities such as agility, flyball, competitive obedience, and Frisbee retrieval. While all breeds need exercise and mental stimulation, the highly intelligent, energetic Border Collie needs them more than most.

The Border Collie is a medium-sized dog. Although black-and-white dogs are the most common, Border Collie coats can also be blue, chocolate, and reddish brown. Eyes can be brown or blue. Border Collies who work on farms and among livestock tend to be leaner and less heavily coated than those who compete in the show ring.

Border Collies need plenty of training in order to channel their intelligence and energy into acceptable outlets. In addition to the usual basics, though, a Border Collie needs to learn how to do jobs that are truly useful to the owner. Such jobs can range from herding sheep to catching Frisbees. Border Collies who don't live on farms also need extensive socialization from puppyhood in order to learn how to live with people and other pets.

The Border Collie needs to be brushed every few days to keep his shedding at least somewhat under control. Other than that, a weekly nail clipping and ear cleaning and monthly baths are all he needs to look his best.

Like all purebred dogs, Border Collies are susceptible to a number of genetically-based health problems, including hip dysplasia and osteochondritis dessicans, both of which affect the joints. Other problems center around the eyes, including progressive retinal atrophy and cataracts. Deafness and epilepsy are not uncommon. Dogs intended for breeding should receive the following screenings: OFA, for hip dysplasia; CERF for eye problems; and BAER for deafness.

Rico, famous for learning the names of more than 250 objects; Rex and Fly from the movie "Babe."

© Copyright 2014 LifeLearn Inc. Used and/or modified with permission under license.